"...with the characteristic short muzzle and undershot jaw of its trade or use, which if bred out or allowed to degenerate into other types, the breed would become no longer the mastiff, as they approached nearer in type to their boarhound, bloodhound, or Alpine sheepdog ancestry; foul crosses which have been introduced to the detriment of the true type. Vast dogs long on the legs, somewhat light in bone for their size, are not in reality mastiffs, whatever their owners may think." Wynn 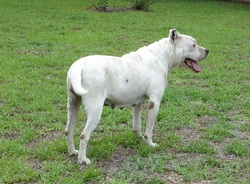 The Carr White English are native to Hawkinsville, Georgia. Today, there are less than 10 known to remain. The OWEPS is the only place pure Carr stock can be found.

"Most all WE in this area trace back to Mr. Jake Carr."  John Conner
For an article concerning the Carr WE, check out our Last American Bulldog Journal page.


In May 2014, the OWEPS was honored to finally return a Carr White English to the Carr family!! 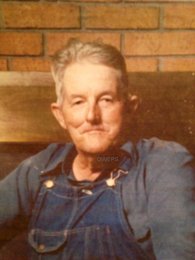 "Mr. Jake was an old school southern gentlemen that farmed along with his sons and grandsons. He always kept a WE in the truck with him as he rounded up the cows, took a hog in the pen, or play with the babies to keep them from harms way. If nothing else, the dogs kept valuable things from growing legs and walking off. His dog of choice was a big headed WE. He always said, 'the bigger the head the more sense they had'. Well, after 60-70 years of breeding dogs, you think he might know a thing or two about bulldogs.

"They are a proud gift from the past, a gift that we may not all be able to appreciate, a gift that may only speak to the hearts of a few, but a gift all the same. It is the matchless courage and sheer amazing heart of the dogs that were capable of such a feat that are worth saving. Our ancestors considered the dogs worth passing on to the future, and we can do no less." 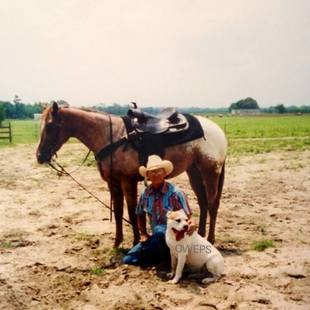 "One old dog off of Mr. Jake's Hammer Head was Rad Max a Million or Max for short. Max lived with by buddy Ashley. You really had to know Ashley to appreciate him. His dad was a farmer / horse trader and Ashley grew up topping off rough stock trying to get them to the sale. 'That old man could ride the hair off a horse.'  With old Ashley's eye for horses, he kept telling me that we had something special. Nobody else had dogs like these. I'd call him a liar and tell him that everyone had dogs like these. He'd say, 'Only 'round here, them Yankees ain't got no bulldogs. You're sitting in the middle of the best bulldogs in the world.' "   John Conner

These dogs were bred to protect livestock, farm equipment, and family from four and two legged predators. They were expected to pull their weight and earn their keep or they simply were not kept. For those unfamiliar with the life of a rural farmer, they're on the go non stop, from well before sun-up until well after dark. They've no time to train a dog to protect and no use for a dog that requires it. They've been bred with an innate ability to protect what belongs to their master and to take care of a threat without instruction or assistance from anyone. They are extremely serious protection dogs that quickly and efficiently eliminate a threat, only quitting if told to by their master. The Carr WE are serious protection dogs with no quit in them unless told to. These qualities are bred in them as they've always been done, and are never trained in them. I've always been told that if you had to train it, it ain't a bulldog! 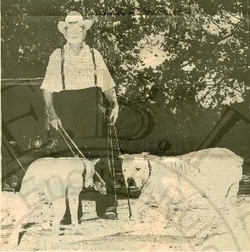 My great grandfather with 2 of his OWE.
It is because of these qualities that they are entirely unsuited for and inappropriate to city or suburban life. It is the consistency of the genotype and phenotype that has lasted for nearly 80 years that sets the Carr dogs so far apart. The line is so pure that the genotype and phenotype has been set and remains to this day even after almost 80 years. Even with the out-crossing to other WE lines, the Carr blood dominates in the offspring, even after generations of line crosses. This is a very pure, very  dominant strain of genes we're talking about here. Genes so pure that decades upon decades of out crossing to other WE blood and even to other breeds has failed to over-ride the genetic prepotency of the Carr blood. Mr. Jake Carr was no geneticist, he was a country farmer that knew how to breed bulldogs, 'the best bulldogs in the world.'  "Well, after 60-70 years of breeding dogs, you think he might know a thing or two about bulldogs."
Below is a collection of Carr WE from the past.
©All Right Reserved